How to Create a Great Lunch in Just 5:55.2 minutes

How to Make a Great Lunch in Just Under Six Minutes by Robert Warren Hess I’m always busy and I tend to grab the first edible thing I can put my hands on. My ability to eat just about anything was honed during my Army career. We ate whatever the mess sergeant put in our mess kits because we never knew when the next meal would arrive. But, this post is about how to get create something tasty and nutritious in just five minutes. As you can see from this image from my iPhone timer I didn’t quite make 5 minutes, but it was close. This Day was Salad Day so Here are my Ingredients . . . I always buy pre-washed salads and greens when I can get them. They cost a tad more, but the washing process is just to time consuming for me I like food with a bit of tanginess, so I like to include some kale, mustard greens, and arugula with my romaine i also love sweet peppers, so I buy bags of peppers like the ones you see here – these do take washing I use salsa for my salad dressing – it’s tangy […] read more

What’s Good for the Goose, Is Good for the Gander How many times have we all heard that from our parents and grandparents? The image to the right shows the results of my most recent PSA test. I’m a 10-year prostate cancer survivor so I watch that number like a hawk. The image shows my PSA values beginning in 1994 – that’s the 1.0 number of the far left of the chart – to the point where I was diagnosed. It drops sharply after my surgery in May 2003 and has remained in the .03 – .08 range since then. If the scale looks a bit funny, it’s because we programmed it with a logarithmic function to accommodate a wide range of values. What Did We Include Cholesterol in ProstateTracker? We did this because cholesterol value – total, high, and low – serve as pretty good (but maybe not perfect) overall markers for the body’s general health. If your HDL and LDL numbers are in the ‘good’ or ‘optimal’ ranges, you most likely are in pretty good health. Can You See My Eating Habit Relapse? The green line is LDL (the bad cholesterol) and the brown line is HDL (the […] read more

Dr. Snuffy Meyers on how to prevent prostate cancer recurrence

As an eight year prostate cancer survivor myself, prostate cancer recurrence prevention, or PCa Growth Arrest as Dr. Myers terms it, is number one of my list of priorities. I’ve met and talked with Dr. Myers twice at the annul Prostate Cancer Research Institute conference in Los Angeles, and I have great respect for his advice and experience. If my prostate cancer ever recurs, Dr. Myers is the first person I will call. This video offers some great insights and advice that comes from his personal battle with prostate cancer. In my opinion, prostate cancer advice doesn’t get any better than this. After you watch this video, visit ProstateTracker.org and get on the waiting list to create your free Internet PSA tracking service. You enter your PSA data and ProstateTracker will send you a reminder 11 months later to take your next test. Dr. Snuff Myers on Prostate Cancer Growth Arrest read more 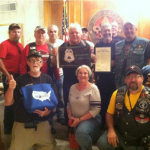